Thought I’d share some photos that I was working on last night – from an art gallery (of sorts) opening on Friday. It’s still open until the 12th of June (7pm) so if you like what you see , or just regardless anyway, you can still go down there. Has a bit of everything – Photography, paintings, sculptures and some more bizarre stuff. All – what I guess you might call alternative, but not necessarily “modern art” (which on the whole I’m not keen on)

Didn’t realise it before going but a few friends were exhibiting also – Ben Hopper and Esinem.

On the opening night there were also a fair few performances randomly scattered around the place….. Oh of court when it’s about art it ‘s called “Space”. And it is fabulous “space” lovey darlings 😉 No really – it is. The place is called “The Old Abattoir” and I’ve seen other events being held there but never been before. No idea if it was a real abattoir or not. But it’s a wonderful mix of old walls, with or without plaster in various states, columns and pipes. Wonder if they do shoots there at all… hmm.

Anyway – you can find out more details at these links. 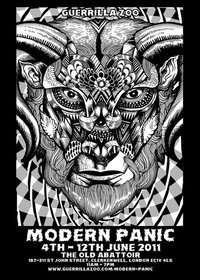 So some photos. Mostly of the exhibits/art but also people and performances.  Click on them to see a larger image.

This entry was posted on June 7, 2011 by Daf. It was filed under Events and was tagged with art, Ben Hopper, Esinem, gallery, Modern Panic, Old Abattoit=r, performance, Syban.