The World Press Photo 2015 (best photo of 2014) contest has been announced again.

It’s showing up on my usual blogs and feeds for various reasons.
First off – that it’s been announced of course.
But secondly – of interest to photographers – that it seems 22% of the final shortlisted entries were later excluded upon checking the original files! It sounds like they had quite strict rules on editing. This included hidding elements through dodge and burn, not just cloning etc. Usually I’d say that this would be pushing it a bit far – but I think in press awards I think this is fair – as press pictures should be as true to life as possible. More details in the press release below.

The winning picture (I rarely agree with the overall winner of such competitions but that’s not rare – likely the judges didn’t agree either) is one about Russian gay rights. 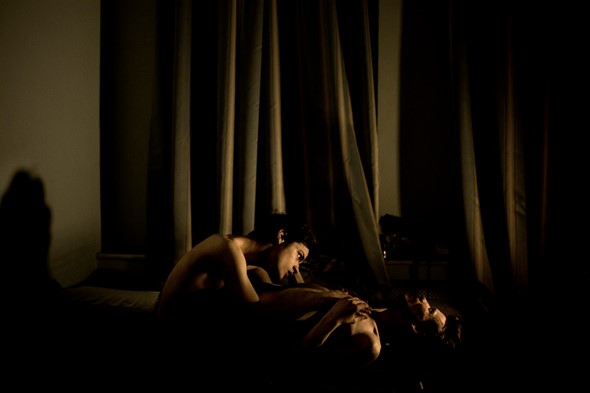 Here’s an interesting video about the contest that I happened across. Nice little short critique on a couple of images. I do really like the table top picture.

A photograph that highlights the difficulties facing sexual minorities in Russia has won the World Press Photo contest’s top prize. ‘Jon and Alex’, from a project called ‘Homophobia in Russia’, shows a ‘intimate moment’ between a gay couple from St. Petersburg and won Danish photographer Mads Nissen the Contemporary Issues category of the competition, as well as the first prize for a single image, netting him 11,500 Euro and Canon DSLR equipment.

The 2015 contest attracted entries from 5692 photographers representing 131 nationalities, and drew in a total of 97,912 pictures. Once again what constitutes an acceptable degree of digital manipulation has been questioned, with a spokesperson reportedly telling UK photo magazine Amateur Photographer that 22% of the short listed entries were rejected by the jury once original files were called in for checking. The World Press Photo foundation published Integrity of the Image (PDF), a paper dealing with the characteristics of image manipulation and the acceptable boundaries last year, which describes what it considers ‘minor/normal/subtle/moderate’ and which acknowledges that defining ‘excessive’ is open to interpretation.

For more information on the winners, the competition and to see a gallery of all the winning entries, visit the World Press Photo website. You can also hear the phone call in which Nissen was told he had won the overall prize.

This entry was posted on February 19, 2015 by Daf. It was filed under Bits of interest and was tagged with contest, issues, news, Photography, world press photo.