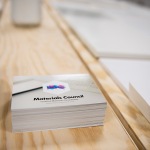 Yesterday I did a job for Brad and Ian at Materials Council and Architronic at their stand at the Super Brands London exhibition – part of the London Design Festival. It involved photographing their stand and the surrounding area in the morning before the public turned up and then coming back in the evening for the opening reception.

White Balance – With mixed lighting (white light panels above, and more orange Tungsten not far away) then white balance is something to keep a close eye on, especially since the title of the display has the word “White” in it – wouldn’t be great if everything was orange! The obvious get-out for this is to shoot RAW and choose the White Balance later in post production – so this is what I did.

Exposure – When you get a viewfinder full of white – and if on some camera automated exposure mode there is the danger that the camera will under expose the white to get it averaged out for middle gray. There are different techniques to counter this – and I used a mix depending on  the scenario. When steadily photographing the white material – going up and down the display I switched the camera to manual and set the exposure myself. The lighting on the display was fairly even so this was made possible. At other times when moving around photographing people around the display etc – I generally used Aperture Priority set to 2.8 for nice shallow depth of field, but set the camera to exposure compensation of +1/3. This could on occasion be not enough, or too much – but since I was shooting RAW this gives more leave-way to change the exposure later on.

With post production the trick is to get the material to be white, but not blow-out the details. Also while shooting and editing the old term of “expose to the right” applies i.e. exposing so that the historgram sides to the right – more white, but without over exposing.  The point of this is that making things darker in photoshop etc tends to be better than making them lighter – as noise etc becomes more evident then.

Here’s a quick selection of the opening night. Got in rather late but edited a quick few for their newsletter today.

I took a few pictures of some of the areas – and will upload a couple of pictures later on.

In collaboration with Super Brands London – the Tent London show is going on at the same time in another part of the venue – The Old Truman Brewery in Brick Lane. I was quite surprised to see this as it was upstairs and a LOT bigger than I expected – it was huge.  As far as I can tell – Super Brands was for the larger more established designer companies, and then Tent was for the smaller companies – either starting out or still relatively small scale.

Unfortunately – as I was working I didn’t really have the time to photograph them but there’s plenty to see.

If you’re into interior or furniture/fittings design and free over the weekend – I highly suggest going. Mind you – open House London is also on this weekend. Entrance for Super Brands/Tent London is £8 in advance or £10 on the door for adults. Less for kids etc.

Construction Time-lapse. You can see another camera on another column.

So I showed a little teaser in my last post about buying 8 little cameras.

These little beauties (GoPro HD) are usually used for extreme sports – Skydiving, snowboarding, surfing and the like as they’re very small, come in waterproof casings have a fisheye lens and are capable of HD. But we’re going to use them for a very different purpose.

As well as HD video they can also take 5Mpx pictures and are able to do timelapse internally – they can take a picture every 1, 5, 10 30 and 60 seconds. And as such they’re suitable for timelapse photography without a controlling computer. we already have timelapse setups using SLRs and a laptop – but the problem there is both the size and the cost. The issue with compacts is that none really (that I could find) have a suitable wide angle lenses. Most seem to end about 28 or at the extreme 24mm lenses. It’s possible to get adapters for some but that’s just another thing to go wrong. In addition the most likely candidate – the Canon G range has an issue – previously – up to the G10 you could control these via remote connection from a laptop – but for some reason – Canon decided to withdraw this in the G11 – strange.

Anyway – back to the point – we’re using them to take time-lapse photography of office installation from bare to fully kitted head office in 14 weeks.

So on Tuesday I set up 7 of these little fellas (will be 8 eventually) at the office development in Central London.

Here are a few examples: 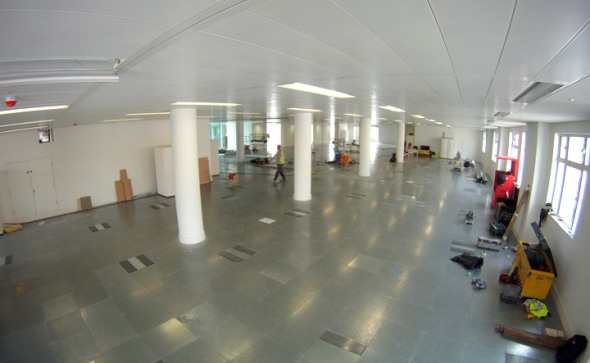 Open plan office (to be)

Bit of me on a raised platform 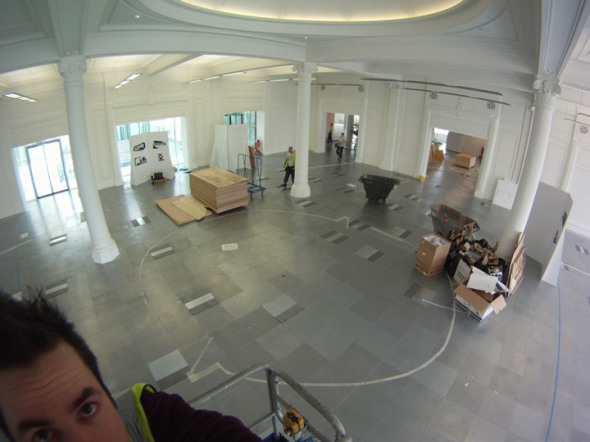 Of course – these being fisheye lenses things are a bit distorted – but eventually we’ll correct this, including doing some cropping so that the picture fits into a standard video screen ratio.

At the moment these are are at their max time-span – taking a picture every minute.

We’ll have rather a few photos! But thankfully since we’re not really interested in night time pictures – we’ll likely delete those. Also to minimise visits to the camera (since they’re not offloading images to a laptop) we’ve maxed out the cards in each camera – to 32Gb – so doing calculations on average file size I’ll have to visit the cameras approx every 10 days. In testing night/dark shots were much smaller file sizes (~800k rather than 2.5Mb) but since this is a central London location with no curtains/blinds – there will be a fair amount of light-bleed into the building which will mean decent sized files.

So that’s what I was a bit stressed about last week – getting all the kit – cameras, special housings, chargers, various different mounts etc.

Glad it’s up and running.

Will post a bit more about the specific kit used a bit later on.

BTW If anybody does know of an ultra wide-angle compact capable of interval shooting – please get in touch. Because SLR’s have a physical shutter we’ve been killing them off like no business! Again – another post for another time 😉