Another year another SWPP trade fair…..

Hope you all had an enjoyable Christmas/Holidays/New Year etc etc. I’m not one for new years resolutions (I believe that if something is worth doing – it’s worth starting now) so will get straight into standard posting.

The SWPP or as it is now called “The Societies” Convention is a standard fixture in January.
SWPP was/is the Society for Wedding and Portrait Photographers.

The convention is part training event/convention part trade fair. I have only really gone to the trade fair part (which is free) and not the rest – training courses, portfolio reviews, etc which are paid.

I’d say the Trade fair is “Ok”. It has grown in recent years but isn’t anywhere close to the size of Focus on Imagine / “The Photography Show” held in Birmingham NEC. Still – there is a mix of things there – equipment manufacturers, training courses, accessory suppliers and so forth but a cut-down version.
I’d say that there is a significant percentage of album/print suppliers showing at the trade fair – but since the Society/show has it’s roots in wedding photography – it’s understandable. This just may not be of interest to some (such as myself).

There are some free demo/training courses at or around the trade fair – however these are most likely to be biased at software or equipment the stalls are trying to sell and may be overly busy. One year there was one free seminar area. This year Adobe seem to have a seminar room which sounds like it’s free. See the Free Demo links below.

Trade Show Exhibitors: http://www.swpp.co.uk/convention/exhibitors/
(Canon is there but no Nikon – as previous years)

Just a quick head’s up about the upcoming SWPP (now renamed “The Societies” Convention/trade fair in London in January.

The Trade fair is free if you register to go before 24th December. There are a few talks for free at the fair – but they’re mostly sponsored by manufacturers trying to sell their equipment.

With the sad demise of Focus on Imaging trade fair this is actually one of the largest Photography fairs around now. Is a shame as Focus on Imaging was so much larger and a much more open space.

As such the SWPP is one of the few photography shows where you can walk around and geek out at photography equipment however not all the main manufacturers will be there. Also as the SWPP originates from Wedding photography there is quite a high percentage of items such as albums and frames to re-sell to customers. I would say that SWPP gets rather crammed at the weekends – but it’s at a new venue now. In the past it’s been at Novotel in Hammersmith – but this year it’s moving to Hilton London Metropole Hotel near Edgware road. I really hope this is a bigger venue!

There’s a list of Exhibitors. Canon is there – but no Nikon – but that’s usual.

I wouldn’t expect to buy big stuff and get much money off – but it’s a handy place to buy accessories and save a little/postage. I usually buy some kind of light modifier or clamps etc. There is also a gallery there – competition winners from the SWPP/”The Societies” competitions – but I tend to find most of them very cliché or cheesy.

Further details can be found at the SWPP convention website.

Something I came across in my Photography news feeds:

Since jacobs have gone bust – a lot of their stock is being auctioned off.  This will be over four days and has already started see:
http://www.joneslanglasalle.co.uk/UnitedKingdom/EN-GB/Pages/Current-Sales.aspx

All the good stuff i.e. SLR related is on day 3 – so still available.

There is a potential for huge bargains since there is so much going on sale in so little time. BUT I think the snag is you need to collect in person 10-12th September 9am to 4pm, and more-so for me – I think the location is the Jacobs offices in Leicester. Darn. Would love a couple of cheap primes. 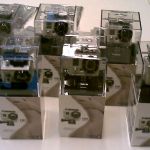 Look what just got delivered !

Sorry for the poor cameraphone picture and no more details – very busy and have lots to do – will post more on Sunday Hopefully.