While viewing something else on eBay (a short video on Jay Misel) I spotted another video that sounded interesting. One by BBC Scotland in a series called “What do artists do all day?” This on on photographer Albert Watson.

I’ve only started watching it but thought it worthy of sharing. It;s in two parts.

Finding it tricky not to be bemused by his accent – Scottish one minute and American the next.

Here’s a link to the whole series.

Came across this little video linked by a friend on Facebook.

I wholeheartedly agree with it – likely why I’m constantly so busy and always have stuff to do. I seem to fill my time up without trying.

Paris through the viewfinder of a Pentax 67

Love this so much I thought I’d share.
Simple but effective and very inspiring in wanting me to take the camera out.

If interested there’s some behind the scenes stuff here : http://petapixel.com/2014/08/23/stunning-video-paris-captured-viewfinder-old-pentax-67/

During my usual lunchtime blog viewing I came across a couple of videos I thought I’s share.

I love inspiration videos – of various guises – to create art, help those around you, share knowledge, find new skills etc and these are similar but a little different. They show how we shouldn’t give up – that over much of time “success” (however you judge that) often isn’t a quick thing, isn’t immediate. I think the films are correct in stipulating that in the modern age we’re used to getting everything quickly – the hear and now – which can mean we’re more impatient than we used to be. So hopefully they may help anybody who thinks it’s too late for them to “make it” or similar.

I do feel this occasionally – photography is my passion however not my career – I work in IT, but at least in a photography related industry. As with many people with a passion but not profession in such field I sometimes wonder if I could/should/would be any good as a professional photographer – but also think that maybe at 38 it could be too late. Thankfully it’s never too late …. or so say these videos 😉

Inspiration to do your own thing, have your own style

I’ve posted some videos in the past that inspire in various kinds of ways – creativity, technical, to actually just go DO something rather than think about it – etc.

Just come across this one which I thought I’d share.

It’s by Ryan Brenzier who’s a photographer I follow – usually for technical reasons.
Its inspiring in terms of business a bit – but more so for encouraging the viewer to find their own style and pursue that – whatever it is. When developing in something like photography I think there’s a lot of personal pressure to be like someone else or to produce work like someone else, either a peer or hero. This shows that it’s likely a lot more productive to develop one’s own style instead.

Inspiring Behind The Scenes videos 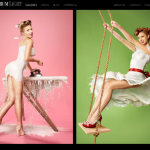 While browsing another site – I came across a link to a behind the scenes video he’s done. Seems he has a few and I find them all rather good – to the point, informative, and inspirational.

It’s interesting how he makes things look so simple, yet puts a huge amount of planning and setting up into a couple of them (e.g. The Trial)

The videos on his site are here : http://aurumlight.com/!videos

Or his Vimeo Channel.

Although I’ve not really recorded much/any video yet – as I have a Video capable DSLR and we do some video at work (my day job) I now keep an eye on some video stuff and read some video blogs.

Here are a few of the video’s I’ve particularly liked.
Some are on practicalities of film making now, while others show the history of some of the technologies used over time and how they’ve shaped what we use today. All very interesting. Some are a bit technical, but then I’m quite a technical person.
Thought worth sharing.

Introduction to Colour in Digital Filmmaking

The History and Science of Color Film: From Isaac Newton to the Coen Brothers

The Changing Shape of Cinema: The History of Aspect Ratio